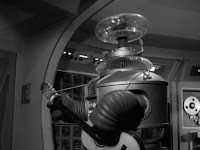 Robots have been doing scary things.

The list goes on and on. Because robots are taking over the world. Not like we humans have done anything good with it, but still. Robot overlords? Not sure I'm crazy about that idea.

But, maybe not all robots are bad. Maybe they can be here to amuse us. Like the robots that make music.

In Japan, there's a thing called Z-Machines that will be releasing a record in April called "Music For Robots." Actually, it's music by robots. Here's a sample:

So, robots aren't all bad.

Unless this is a plot to keep us entertained while they take over. If so, at least we'll be entertained while soulless beings with no regard for human decency make the decisions. Kind of like the Democrats in charge. But with entertainment.
By Basil at 3/18/2014 07:00:00 AM