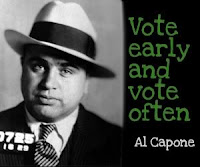 I'm not a fan of early voting. The reason is simple: it gives Democrats more time to rig an election.

Now, don't think I'm biased against Democrats. My dislike is based on experience. But I have no illusions that many Republicans wouldn't do the same thing.

If a bunch of Republicans could rig the vote and get away with it, they would. But, since the media is full of Democrats and their ilk, they'd be all over the Republicans while ignoring the Democrats.

Now, not all media members are dishonest. I suspect if Chris Wallace (Fox News) or Jake Tapper (CNN) became aware of voter fraud, they'd report on it, regardless of who did it. But most members of the media are so full of Democrat Kool-Aid that they would believe any excuse a fraudster would spew.

So, the Republicans won't get away with vote fraud. Democrats will. And have. And do.

And the biggest avenue they have is this whole "early voting" thing. It's nothing more than a way for crooks to be crooks and commit fraud.

Voting should be on a set day. One day. And, if someone can't be bothered to vote on that one day, great. We have too many low-information voters already.