I'll buy that for a dollar!

Went shopping at Dollar Tree the other day.

If you're not familiar with Dollar Tree, it's a store where everything's a dollar. They're headquartered in Virginia, although their first store opened in Georgia.

Anyway, lot of cheap stuff ... and I don't just mean in price. Lots of stuff about like what you might expect for a dollar.

Still, you can find some good deals on some stuff.

So, we'll look for a deal there.

And, the other day, we were there.

Let's move over to, say, Winn Dixie, K-Mart, or some other store. When you go in, you pick up a sale flyer. At least, I do. To see what's on sale, you understand.

Okay, back to Dollar Tree. 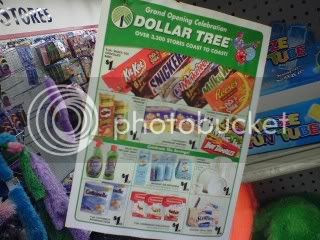 We were there the other day, and there, inside the door, were posted some flyers.

Stuff that's normally a dollar, was on sale for ... a dollar.

Yes, just look at the flyer. Everything listed is a dollar. Items that normally are ... a dollar.

Yeah, I pondered that one for a minute, too.

I'm not sure what I think about it.