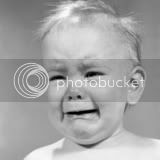 In my lifetime, it's been mostly liberals ... and mostly Democrats ... that bellyache, moan, complain, and whine when things don't go there way.

In case you forgot, the Republican candidate, George W. Bush, won the election.

Since the very first Presidential election in 1789, the person with the most electoral votes -- not popular vote -- becomes President. (Yes, I know. If no one has a majority, the House of Representatives gets to elect the President. Like what happened in 1825.)

Anyway, Al Gore and his supporters couldn't stand that they didn't get their way. And they bitched, moaned, and complained until ... heck, they're still bitching, moaning, and complaining.

But that's how many liberals are. Oh, not all. Some are fine people that have honest disagreements. But those are rare. Most are whining little tittie-babies.

However, this year, I've seen a situation that's unusual.

Conservatives ... and I am a conservative ... aren't getting their way in the primaries.

No, McCain isn't a true conservative. And it looks like he might just be the Republican nominee.

Former governors Mike Huckabee of Arkansas and Mitt Romney of Massachusetts, are more conservative, with Romney being the more conservative of the two. But neither has much of a chance to be the presidential nominee.

Of course, there's Ron Paul who's just plain nuts, as are most of his supporters. I try to ignore him, because he's worthy of being ignored.

Anyhow, McCain will likely be the nominee.

And many conservatives are getting their panties in a wad about it.

I'm not. I'm hanging loose. So to speak.

I'm not in favor of John McCain, but he's a darn sight better than whatever the Democrats will put up against him in November.

So, I'll have no problem voting for him. I mean, consider the alternatives.

Some conservatives are all whining about McCain. Some say they'll vote for the Democrat. Other's say they'll just sit home and not vote.

Neither is a very mature response to not getting one's way.