Went to Sam's Club the other day. Bought like 3000 straws and other way-too-big volumes of things. 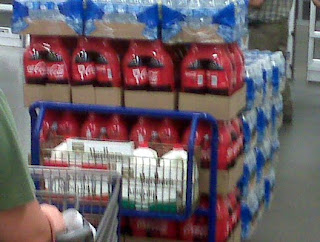 Not so for this guy in line ahead of us.

He had milk, cigarettes, Cokes, and bottled water.

Now, I'm sure that's for some business he's running. Or something.


She: Why don't you get your lazy butt off the couch and go pick me up some cigarettes.

She: And get some milk. Somebody drank the last of it and put the empty milk jug back in the 'fridge. And I bet that someone was you.

She: And I want some bottled water. And don't be spending a lot of money by getting that expensive Dasani or that Aquafina. Deer Park is fine.

She: Oh, and Mother is coming over for supper. She likes Coca-Cola. Don't get any Shasta or some brand like that. And don't you dare get Pepsi. Mother wants Coke. Okay?

He: Cigarettes, milk, water, Coke. Yes, dear. Anything else?

She: Don't waste any money on lottery tickets. It's not up to $100 million yet. Don't waste a dollar, you hear me.

I'd like to imagine he decided he'd not have to be sent to the store again the next day, so he got enough to make sure.

Email ThisBlogThis!Share to TwitterShare to FacebookShare to Pinterest
Labels: Shopping