One of these things is not like the other ... except where they are 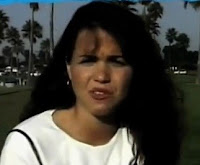 What she actually said was:

Ever heard that part about lust and adultery before?

Sure you have. There is this little book called The Bible. Maybe you're familiar with it?


"Ye have heard that it was said by them of old time, Thou shalt not commit adultery:

But I say unto you, That whosoever looketh on a woman to lust after her hath committed adultery with her already in his heart."

Then again, if you only know what you read in the newspapers or hear on the TV, you might have missed that.

Unless you remember the 1976 presidential election, when the Democrat nominee, Jimmy Carter, told Playboy magazine the same thing about lust and adultery:

Now, Carter did catch a lot of crap about that interview. Part was because he gave the interview to Playboy. Part because of what he said about lust and adultery.

He was the butt of jokes at the time. But, it didn't cost him the election. It actually helped him in the Bible Belt. The Playboy part didn't; the Bible quote did.

Is the media treating her fairly over it?