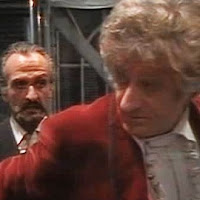 The eighth season of Doctor Who featured the return of the Autons, first seen in Season Seven's Spearhead from Space. It also introduced Jo Grant (Katy Manning) as The Doctor's new assistant, replacing Liz Shaw (Caroline John) who was mentioned as having left for Cambridge. Also introduced, or maybe re-introduced, was The Master (Roger Delgado), a renegade Time Lord.

During each of the five serials (25 episodes), The Doctor battled The Master. The Doctor did finally leave present-day Earth in Colony in Space (6 episodes) when the Time Lords sent the TARDIS, with The Doctor and Jo on board, to some far off planet 500 years in the future. It seems The Master stole the plans to some doomsday weapon, so the exile is temporarily lifted, and The Doctor and Jo wind up on some planet being colonized by Earthmen in 2472. That was the only off-Earth serial in the season. It's also the most left-leaning episode, since it was written by communist Malcolm Hulke.

While the season was okay, there was nothing particularly outstanding abut the season. Yes, the introduction of The Master brought a major villain to the show, but if he's not another incarnation of The War Chief, then he's simply another version of a renegade Time Lord.

The serial The Dæmons (5 episodes) featured a community covered by an invisible impenetrable dome. I think they must have stolen the idea from Stephen King. Yes, I know Stephen King published Under the Dome in 2009, but he it's a rewrite of an unfinished story from 1972. It's obvious The Doctor took the TARDIS forward in time from 1971 (when this episode first aired) and stole the idea from King. He should sue.

That serial also featured a community dance. A lot of townsfolk were dancing in the street, then grabbed The Doctor and tied him to a Maypole. It seemed like something straight out of The Prisoner.

The season-long arc of battling The Master certainly made for a different style of show, and I do miss the leaping about the galaxy and across the barriers of time.

But, once The Doctor gets the TARDIS back fully functional and returns to galavanting across the universe, that'll be the end of Bessie. Though at first I wasn't a fan, I've come to like the little yellow car. I think I want one.
By Basil at 2/16/2014 05:00:00 AM