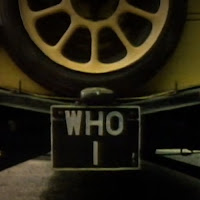 Season Nine of the classic Doctor Who series -- I'm watching them all from the 1963 beginning -- featured the return of the Daleks. And, as always, they want to exterminate, exterminate, EXTERMINATE! The season consisted of five serials, made up of 26 episodes.

It was a welcome break when the first serial, Day of the Daleks (4 episodes) didn't feature The Master. He had appeared in all serials of the previous season. The serial was also the first time the Daleks appeared in color in the show. There were a couple of color films starring Peter Cushing, but those aren't considered canon. They don't count.

The serial also introduced the Ogrons, who look and dress like there were based on the Klingons from the Star Trek movies. Another instance of The Doctor going into the future to steal ideas from other shows, I suppose.

The version I watched is the Special Edition, which means they added some CGI effects. I understand there is also a difference in a scene where The Doctor battles an Ogron.

The Ice Warriors made an appearance in The Curse of Peladon (4 episodes), although they aren't villains in this episode. It also featured Patrick Troughton's son, David, as one of the major characters in the serial. It was an off-Earth serial, with a reference that the Time Lords directed the TARDIS there so The Doctor could solve a problem. They got the idea for temporarily paroling the hero to solve a problem by going forward in time and stealing the plot point from 48 HRS.

The Mutants (6 episodes) was another off-Earth serial, as was The Time Monster (6 episodes), at least partially. With three of the five serials occurring completely, or with a good deal of the action, off Earth, it's almost as it was before the exile.

The Master did show up in the third serial, The Sea Devils (6 episodes), and the fifth serial, The Time Monster. The Sea Devils, which featured an aquatic race related to the Silurians, was the episode where The Doctor first uttered the phrase "reverse the polarity of the neutron flow." The Third Doctor used a shortened version, "reverse the polarity," in other serials, including The Time Monster. That serial is the third one dealing with Atlantis, by the way. We now have three different versions of the destruction of that civilization. I'm sure they're all true.

One other thing about The Time Monster: it featured The Doctor and Jo traveling in both Bessie and the TARDIS. Not at the same time, of course. The TARDIS did get a slight makeover inside. The original setup was nine years old by this time, and was falling apart. So, not only is it bigger on the inside, it's newer, too.