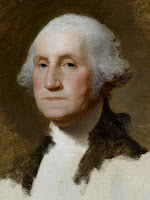 You know what today is, right?

If you said "Presidents Day," you need to be beat with a stick. Several sticks. With knots in them so they hurt really bad.

This day is set aside to honor the first President of the United States, George Washington. He was instrumental in the founding of this nation, and if anyone deserves a holiday, it's him.

Washington's Birthday was the fifth national holiday established, after New Year's Day, Independence Day, Thanksgiving Day, and Christmas Day. It was one of the holidays picked for a Monday observance in 1971 when they started screwing around with federal holidays, and making some fall on a Monday. Along with Washington's Birthday, the holidays Memorial Day, Labor Day, and Columbus Day were also moved to Mondays. The first four holidays and Veterans Day kept their regular days.

If you want one of "those people" that are always correcting others for things ... you know, like I'm doing right now ... and you want a link to throw at people, use this link to United States Code 5 U.S.C. 6103.