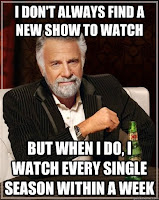 For some reason, it's now news to talk about binge watching.

Binge watching, if you don't know, is watching a whole bunch of shows at once. And it's not really a new phenomenon.

Back in the days when you recorded stuff on your VCR -- Does anyone still do that? Other than Harvey, perhaps? -- you could keep all the episodes together and watch them. I had a wife that did that for her stories. (That's soap opera, for you kids.) She'd set up the VCR to record her favorite show, then watch them all. She would sometimes watch one or two, then have to fast forward back to where the tape was so that she wouldn't record over the next episode or two before she watched it. So, binge watching was NOT the best way with VHS tapes.

TiVo solved the whole issue of only watching one or two and having to make sure you didn't record over an episode you hadn't watched. Then, you didn't have to binge watch. But, it also made it easier to record a bunch of other shows. But you didn't have time to watch them until the weekend, so that actually made for more binge watching.

Shows would come out on VHS and later on DVD, and you could buy whole seasons of shows and sit and watch them. Still can. Well, DVDs anyway.

Then came streaming. You could get Netflix and that catalog of online content. You can also get Hulu/Hulu Plus, Amazon Prime/Instant Video, Crackle, or any of hundreds of other online services and Websites.

So, binge watching isn't new. But it's apparently news.

At The Daily Beast, Roland Martin has his panties in a wad over binge watching. Apparently, that's important to him.

Then, there's a story by Alex Soojung-Kim Pang in The Independent that says binge watching is good for you.

So, who are you going to believe?

I binge watch. I'll watch several episodes at once, whether from a streaming service, or something recorded from the TiVo. And, I'll watch other shows as soon as they come out. It really depends on the show.

For instance, I watched every episode of Breaking Bad as soon as I could. I do the same thing with Justified. I don't wait to watch the next episode.

Of course, after the Breaking Bad finale, I binge watched the whole series from start to finish. It gave it a little different perspective, and I enjoyed it just as much. I tried that with The Shield one time, and had to stop and go take a bath, just to get the grittiness of the show off me. I never finished binge watching The Shield, though I did watch each episode. Just one at a time.

How about you? Is this a big enough deal for you to even care about? And which way do you go?

Do you binge watch? If so, what? If not, do you think that binge watchers a bunch of sad, lonely, pathetic excuses for human beings? Or are they simply fans enjoying their pastimes in the best way possible?
By Basil at 2/20/2014 04:00:00 AM

Email ThisBlogThis!Share to TwitterShare to FacebookShare to Pinterest
Labels: Television, The Usual Stuff