More things I don't have to do 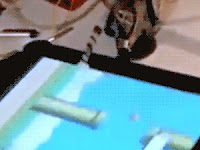 Just in time for the pulling of the Flappy Bird app from Apple's App Store ...

Hey! I've figured out where Frank J's been! He's been so upset that Flappy Bird is no longer available that he's holed up in a room somewhere, not wanting to deal with the world. But, he'll be okay. He'll be back soon, I'm sure.

Anyway, just in time for the pulling of the Flappy Bird app from Apple's App Store, two guys in China built a robot to play Flappy Bird. Really. (via Dan Collins/Facebook)

How does this impact you? Or, more importantly, how does it impact me?

Well, it doesn't. Not really. Because they've now built a machine to play a game that I don't have time to play.

That means the Chinese have finally caught up to where I was in 2008, when the TiVo was recording shows I never watched. Then I'd delete the shows because I wasn't going to watch them.

So, in 2008, instead of me watching all that TV, I just had the TiVo watch it for me. They're building cars that drive themselves. The NSA reads my emails so I don't have to. And, now, I don't have to play Flappy Bird because I can have a robot play it for me.

Pretty soon, I won't have to do anything. I'll be able to do nothing, and be good at it.