Don't give in, Nancy 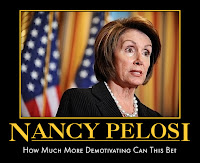 Them internets are crawling with stories that Democrats in Congress are wanting Nancy Pelosi to step aside as that party's leader in the House of Representatives.

I think she should stay on the job. Not that you could say "job well done" about her. On the contrary, she's led this country down the road to hell.

But, that's exactly why she should stay on the job.

With Nancy Pelosi as the leader of the Democrats in the House of Representatives, she's a reminder of what happens when you put a bunch of socialists in charge of important things. And everyone knows that socialists should be in charge of getting their dirt out of Boss Kean's ditch ... and nothing more.

If the Democrats replace Nancy Pelosi, they might pick someone who doesn't remind Americans that Democrats are idiots who shouldn't be trusted.

So, I really really want her to stay in charge of the House Democrats.