There's a store in the area -- Terry's Grocery in Smiths Station, Alabama -- that runs ads on local cable. 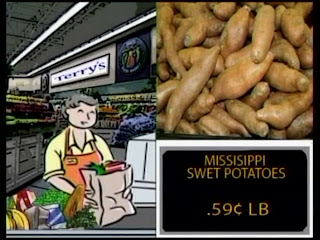 Want to see the whole commercial? No? Then skip to about 20 seconds into this:

I'm not sure who's responsible for this, but I blame both the grocery story and the cable company.

If the store sent the copy with those misspellings, then they're stupid and are to blame. And so it the cable company because they're airing it despite the obvious mistake. Stupid cable company.

I'm sure all the people involved in this are nice. Okay, I have no idea if they're nice or not.