I'm always trying out new browsers and such. Seems I can't be satisfied with anything. That's my feminine side, I suppose.

When Netscape was the only browser worth a darn, I was trying out Internet Explorer 3.

When Internet Explorer was ruling the world, I was looking at Mozilla and Firefox. Oh, and Opera.

When I got a Mac, I rarely used Safari, opting for Firefox and Chrome.

Now, I'm trying out RockMelt. It's that new browser from some of the old Netscape crew. And, I'm not sure what I think about it. It's different.

RockMelt is based on Chromium, which is Google's browser-buildy-stuff. 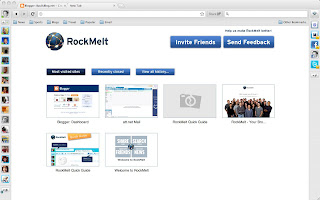 So, I'm trying out the RockMelt. And, I suspect, it'll be the greatest thing ever.