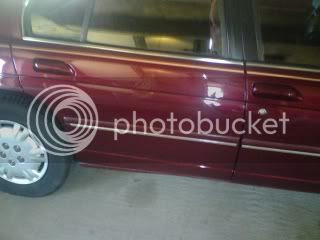 It took over three weeks ... 23 days to be exact ... but the whole episode with someone backing into the car is now behind me.

It got complicated because it wasn't his vehicle he was driving. His insurance (Progressive) said I needed to contact the owner's insurance.

So, I called USAA, which was her insurance.

The person assigned to the case never called me back.

I called them, told them what I thought about it all ... and it wasn't nice ... and asked to speak to someone higher up the food chain.

He spoke to me and said he'd get it resolved.

And, he did. Pretty much.

He assigned another person to the incident. And the new guy did call me back.I took the car over to one of their "approved" or "preferred" body shop. The shop was great. They got on it, although it took longer than expected. But, that was because they wanted to work out an issue with the door seal. And they got it.

So, yesterday, I went to pick the car up. Only, right as I got there, they called me to let me know of an issue.

Seems that USAA ... contrary to what I had asked them to do and what the body shop was agreeable to ... wouldn't send them a check. They told the body shop that they had already sent me a check.

Only, I hadn't received a check.

Well, the check from USAA came in the mail today.

So, this whole unpleasant episode is now behind me.