Of course, this was all shortly before they came out with the new iPods. Just my luck on timing, huh?

But, I'm not unhappy with the iPod. On the contrary. I think I get it now.

You see, I was always one of those that looked at folks carrying an iPod and wondered what that was all about.

And, when I got one, I wondered if it was a good decision.

The Shuffle? I liked it immediately. It was the iPod with video ... my iPod ... that I wasn't too sure about.

Well, I think I get it now.

I was listening to "Sweet Home Alabama" on the iPod yesterday. I've heard that song hundreds of times since it was released over 30 years ago.But, I never heard the sampling of the Neil Young song.

Oh, I knew all about Van Zant's writing the song in response to "Southern Man," but in all these years, in all the hearings of the song, I never heard, the sampling of "Southern Man" ... or what I now understand is Al Kooper's impersonation of Neil Young's singing ... until yesterday.

But, actually, the music was the easy part. I "got it" when we got the iPod Shuffle.

It was actually the video part that I just didn't get.

I mean, who would try to watch a video, whether it be a music video, a TV show, or a movie, on a small screen like that?

I just didn't understand it.

I had downloaded some music videos to entertain the oldest granddaughter. She thinks Weird Al is cool. Or at least one of his videos ("The Saga Begins").

But I was watching another one of them ("Smells Like Nirvana") while sitting on the couch, and looked up at the TV sitting across the room.

I looked back down at the iPod. Then back at the TV.

Then, I held the iPod up at watchable distance in front of the TV, then slowly slid it to the side. 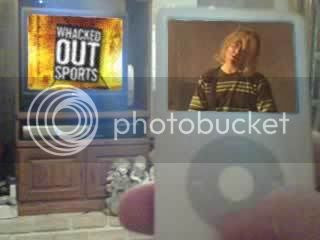 I repeated it, only this time, slowly sliding it down.

I was comparing the height and width of the screens.

They're just about the same size.

And, the iPod's picture is clearer.

Email ThisBlogThis!Share to TwitterShare to FacebookShare to Pinterest
Labels: iPod