Met the Wife for lunch at Subway today. Still there as I write this, by the way.

She likes the roast beef sandwiches. Orders them most of the time. Me, I prefer the Subway Melt or the Italian BMT.

But, today, I decided to go crazy and and order a chicken bacon ranch sandwich. I've had them before. And they're good. McDonald's also has a similar sandwich. I like it, too. But we weren't at McDonald's. We were at Subway. Their Internet connection works. Plus I like the staff.

One thing that the Wife and I do is carry hand sanitizer. I carry Purell. She carries Avon. 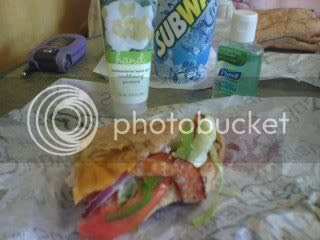 Well, I got the sandwiches while she found a table (which is sometimes a premium at the Subway on Broadway in Columbus). And, when I got to the table with all the food, chips, apple parts, and sandwiches, I also broke out my Purell.

Only, she didn't want that. She wanted her Avon hand stuff. And asked me if I wanted some of that.

"Sure," I said, not realizing the full impact of that statement.

Not so with the Avon.

This Avon stuff seems to stick around. I rubbed my hands together for what seemed like forever. The stuff was gone, and I was simply rubbing off skin. But it still felt like the Avon hand sanitizer was on my hands. And smelled like it, too.

I used a napkin to try to get the stuff off, but to no avail.

I ate my chicken bacon ranch sandwich. And my hands smelled like gardenias. And smell impacts taste, in case you didn't know.

So, I ended up eating a chicken bacon gardenia sandwich.

Yeah, I should have just gone and washed it off, but I didn't. But I will next time.

Which is sad. The fact that there will be a next time.