Thanks to Mother Nature, the Columbus Catfish won the South Atlantic League South Division 2nd half title, and a spot in the playoffs.

Needing to avoiding losing 4 straight games, the Catfish were scheduled to end the season in Savannah, playing the Sand Gnats (Mets). But it rained. A lot.


So much so, that, try as they might, they couldn't get one game in.

The Wife and I were in Savannah this weekend, hoping to catch a game. Instead, we got wet.

Sunday, after lunch, we went to Grayson Stadium. The Catfish were there. And Savannah staff was looking at the field, along with Catfish field manager Jim Morrison.

Talking to the Sand Gnats staff, they said it would take two days to get the field ready, if the rain stopped then. And the rain didn't stop then. And the forecast was for more rain through the night. And on Monday.

So, while they couldn't tell me that the games were canceled, their description of the situation told me they were canceled.

And, the Wife and I left.

The cancellation became official while we were on the way back. 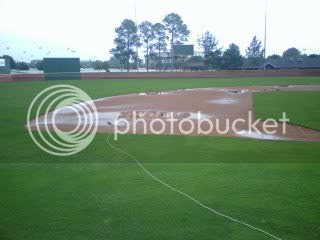 But all this rain got me to thinking.

You may know that the Catfish have had games postponed or canceled because of unplayable conditions.

You may or may not know that the RedStixx, the team that left Columbus after the 2002 season, had to play all of their playoff games on the road, because of problems with the field.

Since the RedStixx left, this year is the first year that Columbus has had a playoff team. And I was worried about a repeat of playoffs on the road.

So, I ran by Golden Park, where the Catfish play. And, yes, there is some rain standing on the field. But not nearly as much as I saw on the field in Savannah. 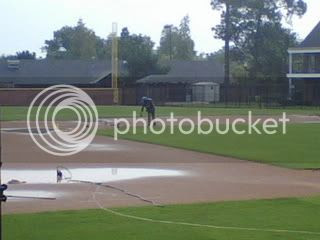 And, there was someone working on it. So, if the rain keeps up, we might lose the home game Wednesday. But it won't be because no effort was being made.

I've already got my tickets to the game Wednesday.

And I don't want to have to drive to Augusta.

At least, not until Friday.