How would you do it in large bills? 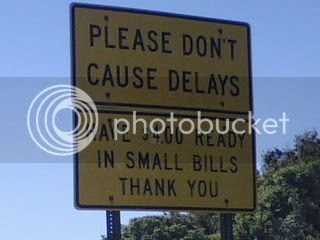 We're in Huntsville for the Southern League finals between the Montgomery Biscuits and the Huntsville Stars (Brewers).

I'm wondering what kind of money they're using. Or what the exchange rate is here on American money.

I mean, they have a problem with people carrying four dollars in LARGE bills?

Money must be a concern here, for sure.

I mentioned earlier that we had a hard time finding a hotel close to the ballpark. Didn't in fact. But we found a boat-load of banks.

I assume all those banks have money in them. If not, there must be about 400 empty bank vaults. So, I assume there's some serious money in this town.

But if it they can potentially have four dollars in large bills ... then I'm not sure if they have as much money as they think they do.

Oh, I considered stopping by one of those many banks and changing four dollars in bills for coins. But they might not have seen the humor in the situation.
By Basil at 9/15/2007 02:00:00 PM