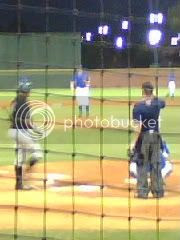 The Catfish dropped a 5-0 decision to the Savannah Sand Gnats (Mets) tonight, to finish a miserable home stand that came on the heels of a miserable road trip.

Starter Woods Fines once again pitched well enough to win ... and once again picked up the loss. He allowed 2 runs on 3 hits, striking out 3 in 5 innings work. Jason Ragan allowed a run on 1 hit in 3 innings. Josh Johnson pitched the ninth, allowing 2 runs.

The Catfish left 6 runners on base, 4 in scoring position -- runners on 2nd and 3rd in both the 1st and 3rd innings -- as they were held scoreless, despite outhitting Savannah until the 9th inning.

SS Sean O'Malley had a pair of hits to lead the Catfish.