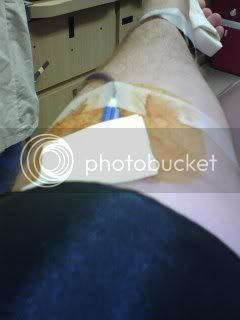 The Columbus Catfish had a Red Cross Bloodmobile set up at the ball park today. And I stopped by to give blood.

I've given blood since ... gosh ... 1976, I guess. I don't remember giving in high school. But, after I graduated, I participated in blood drives.

When I was at the radio station, we'd do remote broadcasts from blood drives and such. And, naturally, I'd participate.

After I went to work in Jacksonville, I didn't give as often. In the Army, they'd have blood drives, and naturally, I'd give then.

After leaving the Army, I haven't given much. They do have blood drives at work, but the seem to often coincide with times I'm not there. Not always, but much of the time. But, I have given when they have drives on dates and times I'm there.

But, today, I had the chance. And stopped by and gave blood.

But all types are useful. Not just for red blood cells, but for platelets, plasma, and cryoprecipitate.