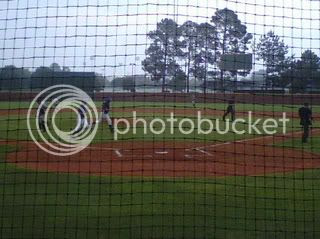 Neither the Charleston RiverDogs (Yankees) nor Mother Nature wanted to cooperate with the Columbus Catfish Saturday night.

Charleston scored a pair of unearned runs as they took a 5-0 lead over the Columbus Catfish Saturday night.

In the bottom of the 2nd, the Catfish were trying to get back into the game when the rains came.

The umpires tried to finish the innings, meeting briefly when the rains picked up, but had to send the teams to the locker room. 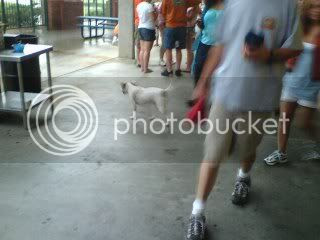 In the mean time, the planned "Bark in the Park" activities were dampened by the rain.

Several fans were participating in the promotion, and dogs were everywhere in the ball park.

When the rains came, wet dogs were everywhere.

The Catfish will try again twice.

The team will play Sunday afternoon at 4:00, finishing the 9-inning game before playing a 7-inning contest that will conclude the series. The staff will re-schedule the "Bark in the Park" promotion for a later date.

Update: Sunday's doubleheader is canceled. They'll make the games up in Charleston later in the season, since Charleston won't be back to Columbus this season ... or ever. The "Bark in the Park" promotion will be held on July 12.
By Basil at 6/21/2008 06:51:00 PM