You've seen the picture of Jesse Thornhill, haven't you? You know, the guy that tried to run over his landlord in Tulsa? 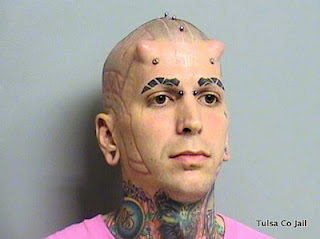 Some picked up on this passage from the story:


Tulsa Police say 28-year-old Jesse Thornhill tried to run down his landlord in his '96 Ford Windstar van Tuesday evening in the 1200 block of South Delaware Place.

But that, I can understand. You have to make the most with what you have. He had a Windstar and a landlord that needed running over. What else do you do? Run over your landlord with your Windstar, of course. It's not like he had a fleet of other vehicles. Or, if he did, a Windstar is a better choice than a smart car.

A Windstar has many useful features. He could use it for moving bodies, or several body parts. He could transport several other tattooed freaks to the Dairy Queen or to the nearest altar in the woods. You want to make fun of the Windstar, but there could be legitimate uses for a Windstar.

What I don't understand, though, is the pink shirt.

Having a single vehicle and that vehicle being a '96 Windstar is reasonable.

But, seriously? A pink shirt? He didn't have any other shirt? And why would he have a pink shirt?

How can anyone who looks like Jesse Thornhill expect to be taken seriously while wearing a pink shirt? The landlord wasn't injured. Unless he pulled something while laughing at Jesse's shirt.

I don't know what this country is coming to. Sparkly vampires, pink-shirted demons, community organizers in the White House. It's like Stephanie Meyer is writing the script. And if we don't get our act together, in the future, people will be reading The Short Second Life of the United States (Obama Saga).