My GPS tried to kill me

Last week, Wife and I spent a few days in North Carolina: 2 days at Asheville, and 2 days in a cabin near Chimney Rock.

Because between Asheville and the cabins, the GPS decided it wanted to kill me. 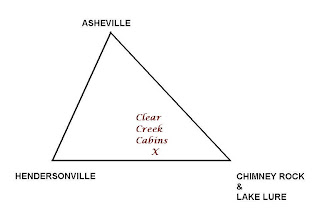 The safest way to leave the east side of Asheville and reach the cabins would be to take US-74 to Bat Cave, then take Chimney Rock Road toward Hendersonville, then make your way to Clear Creek Road.

But, the GPS didn't want me to do that. It had another route in mind. And, since it's a fancy GPS machine that uses satellites and everything, I put my life in its hands. It decided to send me up Grant Mountain Road. Which looks okay for the first half-mile or so. Then, it really gets ... like a mountain road. Like you can see on this actual photo of the GPS screen: 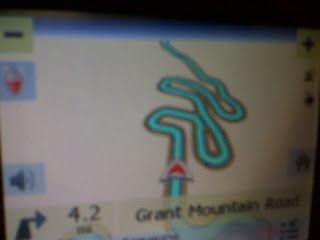 And it was like that for most of the 5 miles we were on that road. But, thankfully, we made it to the turn-off to another road. 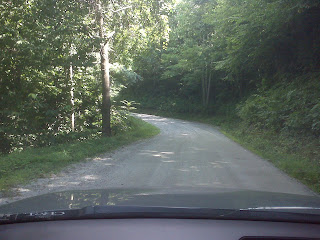 We finally made it through that, and got to the cabins only 15 minutes late, as opposed to 30 minutes early (which is what I thought we would have done).

The next day, the GPS was still copping an attitude. We drove into Hendersonville to so a little shopping (Wife was there, too, remember?). We just drove what we thought was the correct route. We made it without using the GPS, but I realized I took a wrong turn and ended up taking longer than we needed to. So, when we headed back to the cabin from Hendersonville, I fired up the GPS again.

Imagine a gravel road. A one-lane gravel road. That hasn't been maintained. So now grass is growing up in-between what are now gravel ruts. And the grass is in bad need of cutting. And this gravel-rut road runs through people's yards. Beside clotheslines and Big Wheels and such. And people sitting on their back porch looking at you trying to remember if the shotgun is loaded and which of the kids to send after it.

We made it back safely. Mostly by not taking any more side trips anywhere so the GPS could have another opportunity to kill us.
By Basil at 7/27/2010 07:18:00 AM