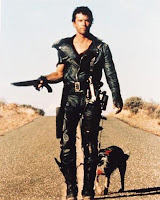 He had a bunch of hit movies. Like Lethal Weapon

Actually, he had a lot of hit movies

But, for a while, he was golden.

Now, not so much. First, there was his drunk driven arrest about four years back. Now, there's the audio tapes (more than one) of his argument with his girlfriend. You usually have to attend a cabinet meeting featuring both Rahm Emanuel and Joe Biden to get that much crazy and profanity in one place.

Right now, if you read the news, Mel Gibson is seen at Satan incarnate. And, though he's a talented actor, director and screenwriter, it seems that his career might be over. Unless he can be rehabilitated. But, is that possible? I think it might be.

It will be tough, though. Giving money to save the rain forest won't work. He's done that. Give millions to help sick children? Done that. No, that's not nearly enough.

So, what would it take to rehabilitate Mel Gibson?
Perhaps this would be enough to return Mel Gibson to everyone's good graces.

Is he crazy? Yeah, probably. But, he's not the right kind of crazy. He needs to be batsh*t crazy, barking moonbat crazy, to get his career back.