All the news that ... doesn't fit our agenda we hide

The president has decided to keep the military tribunals that President Bush set up.

Remember how bad and evil the whole tribunal thing was? At least that's what all the whiny liberals said. Including Obama.

Now, suddenly, they're a good thing.

Still, the Obama reversal is news.

So, how is the left-wing media covering it?

The Old Gray Lady has it on the front page. Yes, the New York Times recognizes that it's a story of import. So much so, they put it way down at the bottom of their home page. 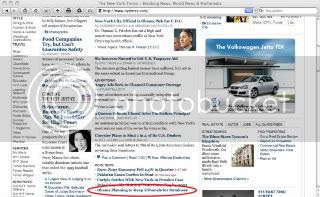 What about TV networks? Obama's favorite channel, MSNBC, doesn't even have it on their home page.

But not all of the left-wing media is burying the story. CNN has it prominent on their home page. As prominent as Fox, in fact. CBS and ABC News have the story on their front page, though not as prominent.