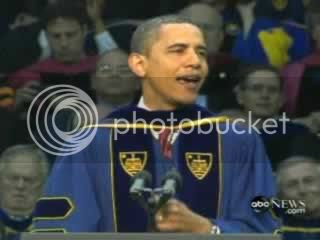 SOUTH BEND, IN (ABC News) - The president spoke to graduates at the University of Notre Dame about coming together over disagreements about abortion by finding "common ground."

"I do not suggest that the debate surrounding abortion can or should go away," Obama said. "Because no matter how much we may want to fudge it -- indeed, while we know that the views of most Americans on the subject are complex and even contradictory -- the fact is that at some level, the views of the two camps are irreconcilable."

Protesters at the university drew a sharp contrast between pro-abortion and pro-life camps The president acknowledged the protesters and their signs, using them to offer his common ground proposal.

"I see the signs that show aborted fetuses in trash cans," Obama acknowledged. "I understand that you feel the fetuses are actually babies. So let me offer a compromise. All fetuses from federally funded abortions will be thrown in waste bins located at cemeteries. This will allow all sides to maintain their positions with dignity and honor."
By Basil at 5/17/2009 06:08:00 PM