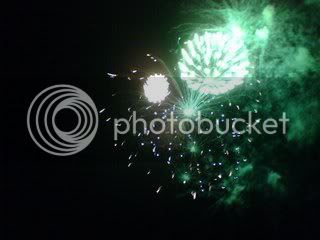 The Wife and I went to the fireworks in Albany last night.

Why Albany? You remember that we have a friend playing on the Anderson Joes baseball team, right? Well, Brandon Carter and the rest of the Joes had a series in Albany against the South Coast League leaders, the South Georgia Peanuts. So, to Albany we went.

After the game, they had a fireworks show, what with it being the Fourth of July and all.

Pretty good show. Didn't last a real long time, but it was a fine show nonetheless.

My grandparents (my mother's parents) lived nearby the stadium, and on the Fourth, they'd stay up past dark, then head out into the yard and look towards the stadium to see the show.

I supposed some folks might not have liked all the noise and everything in the middle of town, but it didn't seem to bother my grandparents. Rather, they enjoyed the show.

In fact, my grandfather (Papa), on his last night on earth, watched the fireworks show from his yard, and went to bed all smiles. He never woke up.

Anyway, despite the fact that the fireworks show brought joy to my grandparents ... and to many others ... it really wasn't all that great of a show. We didn't know it when we were younger, but we caught on as we grew up.

The fireworks show was pretty much an amateur job. It was as if somebody drove down to Florida, to South of the Border or somewhere like that, and bought a pickup truck load of fireworks, then came back and set them off in the middle of the football field.

And, for all I know, that may have well been exactly how it was done.

Once everybody was seated ... or otherwise situated ... in the stadium, some guy would run out into the middle of the field and stick a burning object at another object, then run away.

Whooosh! The little rocket would shoot up into the air in a trail of sparkles, disappear for a second or two, then, with a pow that sounded halfway between a boom and a pop, would shoot out in all directions one or more of the colors of gold, white, green, red, or blue. Often one color, sometimes two. Maybe even three, if they went all out.

Anyway, the item would flash, the crowd would go "Ooooooooo" and then the man would run back out onto the field holding his igniter.

He'd again poke at one of the items that were laid out on the ground, run away, and the whooosh, followed by the pow, would happen again.

It would repeat. Trot to mid-field, poke around until it lit, run away, then the whooosh, Pow, ooooooooo.

And on and on until that magical moment.

Don't know if he was getting tired of running, or if it was a predetermined time, but that's when he'd poke around several times and shoot off several at once.

No pattern, no timing of explosions, just a "lets shoot off what's left" kind of looking thing.

The crowd loved it.

Today, all the events are coordinated events, with music and such.

You don't see a one-at-a-time, followed by an all-at-once kind of thing anymore.

Unless a backyard fire is involved, along with lots of beer. But those usually end with, at best, burned fingers or, at worst, a burned-down trailer and a blown-up pickup truck.

Email ThisBlogThis!Share to TwitterShare to FacebookShare to Pinterest
Labels: Memories