The Shoes Make The Man 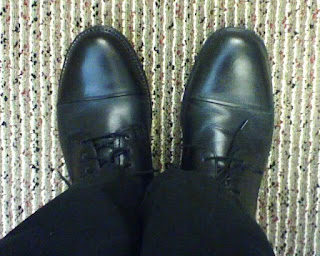 The old saying is "the clothes make the man."

Well, if that's true, then shoes are a large part of that.

I usually wear black shoes to work. I have a pair of brown shoes that I'll wear on occasion. But, mostly, it's black.

Now, I don't have a lots of pairs of shoes. I'm a guy. I need one pair of black shoes.

But I have three.

One pair is the pair that I bought with my tux. I wear them with the tux, and that's pretty much the only time I slip those on.

So, then, I actually need two pairs of black shoes. The pair to wear with my tux, and the other pair to wear to work, church, etc.

Only, the store had a sale. So I bought two pair.

But, the thing is, I must have screwed up somewhere along the way, because one pair fit just great, and the other pair hurt like a son-of-a-gun.

Only, I didn't notice until after several weeks.

You see, I put a pair on and wore them. And when I needed to wear black shoes, I put the same pair on again.

So, when they were no longer fit to wear to work or church, I broke out the other pair I bought. That's when I discovered they were ill-fitting.

So, back to the store.

Only, they weren't running any sale or anything. So I bought a pair of black shoes. A pair. One pair. One shoe for each foot. Because that's all I needed.

Well, I've been wearing them ever since, when I wore black shoes. For about a month, I guess.

So, this morning, when I went to put on my black shoes for work, I grabbed a left shoe and a right show.

I figured it was because it had been over a week since I had worn dress shoes (yes, I missed church Sunday morning).

So, I took off the thick socks I had on and put on thin socks.

It was better. But still didn't feel right.

At lunch, I figured out why.

The shoe on my right foot is from the new shoes I bought a month ago. The ones that fit.

The shoe on my left foot is from the shoes I bought a while back that never did fit properly. [picture]