My Wife, the terror suspect

When the Wife and I got to Las Vegas on Sunday afternoon, we had no luggage.

And had no luggage until this morning, when the bell desk brought it up.

I had blamed Delta. And then Northwest. But it turned out neither was to blame.

It was the TSA. 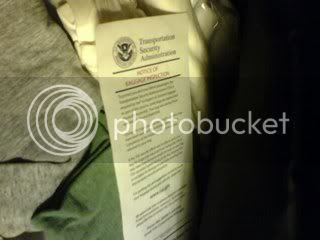 You see, when the bags arrived, and I opened the first bag, the smaller of the two, I found a notice inside. A "Notice of Baggage Inspection."

But only in one bag.

It was the one that contained most of her stuff.

Oh, sure, I had a couple of things in there. But most of my stuff was in the other bag. The bag without the notice of inspection.

Her bag was the one searched. Or so it seems.

I'm not sure what about her made them decide to go into her underwear to search for stuff. But they did.

She was real happy to realize that some overpaid government worker got to run his ... or her ... hands all over her intimate articles.

If she gets her hands on whoever was rummaging through her underwear, I'm thinking they'd rather have encountered Mohammed Atta.