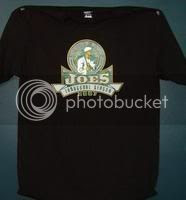 I mentioned the other day about going to a baseball game and catching up with a ballplayer the Wife and I met when he played in Columbus.

Brandon Carter is playing for the Anderson Joes of the independent South Coast League. And, when they visited Macon recently, we went over to watch him play. He was nursing an injury and didn't play, but we caught up afterwards. The next day's game was rained out, and the following day was a day game ... and the Wife and I were working.

Anderson has a trip to Albany coming up soon, and the Wife and I are looking to catch at least one game over there. And, she wondered if we could get a t-shirt or something to wear, to show our support.

We're on vacation in Panama City Beach this week, but, as you can tell, I've found a way to get on the Internet from time to time. And, I've found the merchandise page for the Anderson Joes. They don't have a lot of stuff, but they do have 3 different t-shirts and 3 different hats available. But you can't buy them online.

They do have a telephone number to call. And I called it Monday afternoon. The answering machine picked up. It offered all kinds of different options, but not the first option about buying stuff. And, yes, this was the number on the Web page. Actually, it's their main number.

Anyway, the message said the box office was open at the stadium, and gave the number there. Seems the team's office is located on Main Street, but the ballpark is a couple of miles away, on White Street Extension. So, I called that number.

A fellow named Garrett answered. Not sure if that was Garrett Ball, Vice President of SC Operations/General Manager of the team. Nice fellow. Just that they were getting ready for a ballgame, and the lady that could help me would be in the next day. He took my number and said she'd call the next day.

Actually, the next morning, around 9:15 ET, I did attempt to call, and got the answering machine. No, I didn't leave a message. I had already left one with Garrett.

They had a day game ... which I did listen to, since they broadcast the games over the Internet (are you listening, Columbus Catfish?) ... so, I figured I'd be in the same position as before. You know, getting ready for a game and they couldn't help me.

After the game ... which they won, and in which Brandon scored the winning run ... I gave them about an hour, then called.

At either the office or the ballpark. No, I didn't leave a message. I had done that already with Garret on Monday.

So, I fired off an email, asking how I could order something.

Will they respond to my email? Or return my telephone call?

Perhaps, though, they are selling enough merchandise that a sale of a couple of items to folks living 243 miles away isn't worth the trouble.

But I just have to wonder about a baseball team that doesn't want to sell me a t-shirt.

Update: It turns out they'd love to sell me a t-shirt. They just don't have any. They've sold out. That's what Ashley said when she emailed me this morning:

Unfortunately the only item we have from what you see online is the adjustable field hats. We have sold out of the rest and I was told we would not be receiving anymore of the other merchandise you see. Please let me know if you would like to purchase a hat or two or if you would like to wait until we get our online store set up with the new merchandise (should be within the next week or so). Sorry for the inconvenience and thanks!

Just a case of bad timing, huh? So, to order an adjustable hat ... and most don't fit me well, what with my big ol' head ... or to wait until their online store is up?

That's easy. I've now ordered a hat that might not wear well, and will check back for their online store.

At least I have the chance of having something to wear when we go to watch Brandon and the rest of the Anderson Joes play the South Georgia Peanuts in Albany next week.
By Basil at 6/27/2007 12:40:00 AM