The Wife and I are in Panama City Beach, FL.

In fact, we're in the Burger King at the corner if US-78 and FL-79. That's on what used to be called Back Beach Road, for those that have been PCB before.

The back story on this is that the middle sister, the Mean One, has a standing rental of a house for a week there. Or, actually, here.

Anyway, she had the house this week. But the church had a mission trip scheduled for this week, and she chose to go on that, instead. But the house was paid for, and she asked the Wife and me if we wanted to go.

Okay, truth be told, she asked the Big Sister and the Little Sister first. And I don't know who all else. But they all couldn't go for one reason or another. So she asked me and the Wife if we wanted to go.

So here we are. In Panama City Beach. In a Burger King. Using the BK free WiFi.

Okay, I'm using the free BK WiFi. The Wife is looking around, bored. Waiting on me to finish.

And go to Wal-Mart, I suspect. 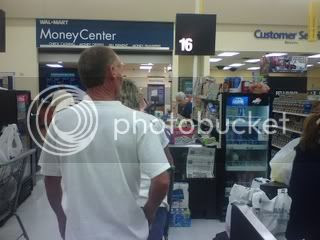 We're been in PCB for 26 hours now, and haven't been on the beach yet. Although we have been to Wal-Mart. Twice.

We went last night. We always seem to forget something when we go off on trips. So, when we get where we're going, we look for the closest Wal-Mart or Target or something.

And we found a Wal-Mart. It was only 45 minutes away. If you've ever driven Front Beach Road in Panama City on Saturday night, you know what I mean.

So, we went to Wal-Mart. On Saturday night. And so did half the state of Florida.

This may seem unrelated, but it's not. You ever see Harvey Korman and Tim Conway do one of those skits where Harvey is a customer of some kind being waited on by Tim's old man character. The Old Man moves oh, so slowly, and takes forever to do anything. And it's funny. Very funny.

Unless the Old Man is a woman working the register at Wal-Mart and you're Harvey Korman, at the end of a long line of people.

Actually, she wasn't that bad. Not at all. It just seemed like it took forever for the line to move.

And it was all so much fun, the Wife wanted to go again this morning. And I suspect, in just a few minutes.