After dropping 5 games in a row for the first time this season, the Columbus Catfish broke out of their doldrums, plastering the Savannah Sand Gnats (Mets), 17-2.

In fact, the Catfish nearly scored double digits in the 8th inning alone tonight. They put up 8 runs in that inning, turning a 9-2 blowout into a 17-2 shellacking. 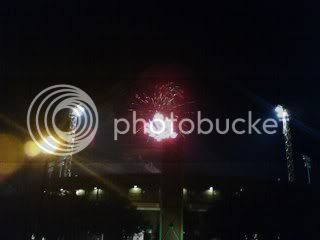 I won't be going into a scoring rundown. That might take all night. But the post-game fireworks weren't the only fireworks at the ballpark. You can read all about the game here. Or here. Instead, here are some interesting ... to me anyway ... items about the game.

Reliever Neal Frontz had the unusual situation of having to keep the opposition to under 15 runs in order to earn a save. Not a bad situation, to be sure. He earned his 11th save by pitching the last 3 innings, allowing 2 hits. He also struck out two.

Offensively, every Catfish player in the game ... except the pitchers, of course ... had a hit. In fact, every Catfish batter except 1 had a hit in the 8th inning alone.