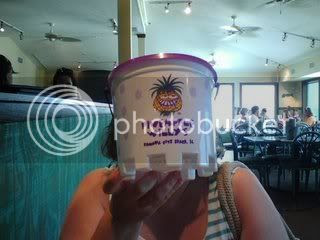 One that was recommended by Jon, a regular commenter here who's also a Columbus resident as well as a baseball fan.

Jon said we should go to Pineapple Willy's.

Now, I've only been to PCB a couple of times before. And I'd never eaten at Pineapple Willy's.

Jon was right. I didn't know what I had been missing.

I had the ribs. They were great. The Wife had shrimp or something. She said it was good. And the sweet tea was very good, too.

We've eaten at several other places, and most of it very good. My Big Sister told me to stay away from this one place she didn't like. She couldn't remember the name of the place, but it had a big parking lot and a very large buffet.

Thanks, sis. That was real helpful.