One night after everything that could go wrong did, things got back to normal for the Columbus Catfish tonight. Good pitching and timely hitting led to a 4-2 victory over the Charleston RiverDogs (Yankees).

3B Cesar Suarez hit his 3rd home run in 5 days off the St. Francis sign in left field to put the Catfish up 1-0 in the first inning.

In the 5th inning, the Catfish chased Charleston starter Gabe Medina after C Craig Albernaz and SS Jairo De La Rosa both singled, then DH Desmond Jennings hit his 4th homer of the year -- and 3rd against Charleston -- over the gate in left field, giving the Catfish a 4-0 lead.

Charleston finally got to starter Josh Butler for runs in the 7th and 8th innings, making it 4-2. Neal Frontz pitched the 9th, survived a scare, and finally picked up his 9th save.

In the 3rd inning, De La Rosa was called out by the home plate umpire after a discussion with the field ump. I'm not sure what happened -- I had looked away on the pitch when I spoke with another fan and missed the action. I think it was a foul ball hit out of the batter's box, but I'm not certain. Perhaps the paper will have the details; perhaps not.

Manager Jim Morrison wasn't happy with the ruling. Neither, of course, was De La Rosa, who expressed disbelief at the call, but didn't argue.

Then, in the 4th, CF Maiko Loyola was thrown out at third when he ran through a stop sign and tried to stretch a double into a triple. It looked to me like he knew he had messed up, committing to third base before checking out the third base coach. He threw his batting helmet to the ground -- angry at himself, I thought -- and broke it. The field ump, Tom Walkoviak, who had made the out call immediately threw him out. 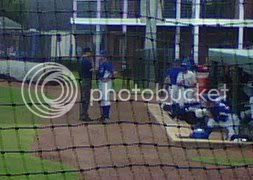 Skipper let the ump hear about it, but managed to not get thrown out.

An inning later, Skipper again had words for Walkoviak, making his case. Again, he restrained himself to prevent the ump from tossing him, but made every effort to get his point across.

Butler pitched 8 innings, his longest outing of the year, allowing 2 runs on 9 hits, striking out 5, and walking none. He improved his record to 4-1, winning back-to-back starts for the first time this season.

The Catfish turned 2 double plays to keep Charleston off the boards for most of the game. It could have been more, but 4 other potential double-plays were not executed because of off-target throws for dropped catches. Since they got the first out on 3 of these, no errors were charged on those plays. The slightly sloppy play is uncharacteristic for this team, and I hope they can get that out of their system.