Where Else But Panama City Beach

While heading to breakfast, we saw a place that, had I thought about it, wouldn't have raised an eyebrow. We are in Spring Break territory, after all. 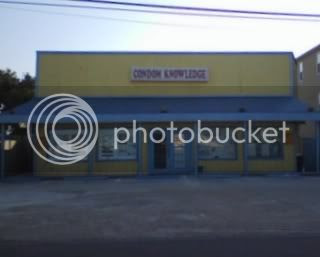 Yes, the name of the place is "Condom Knowledge."

Is there really a market for a store specializing in rubbers?

I'm reminded of the old Saturday Night Live skits about the Scotch Boutique in the mall. You remember. The place that sold nothing but Scotch Tape, but had every shape, size, and color of Scotch Tape that ever existed.

Condom Knowledge was somebody's brain child, to be sure. But, truth be told, they sell more than condoms. Research on the Internet shows they also sell videos, DVDs, pipes & "smokers articles," "novelties," lingerie, costumes, and women's clothing. Who'd've thunk it?
By Basil at 6/28/2007 06:38:00 AM