How not to treat a friend 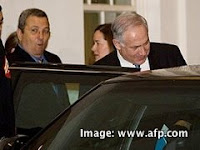 Barack Obama continues to show he's no friend of Israel.

This week, he refused to allow pictures of his meeting with Israeli Prime Minister Benjamin Netanyahu. Then, Obama walked out of the meeting.


After failing to extract a written promise of concessions on settlements, Mr Obama walked out of his meeting with Mr Netanyahu but invited him to stay at the White House, consult with advisers and “let me know if there is anything new”, a US congressman, who spoke to the Prime Minister, said.

“It was awful,” the congressman said. One Israeli newspaper called the meeting “a hazing in stages”, poisoned by such mistrust that the Israeli delegation eventually left rather than risk being eavesdropped on a White House telephone line.

The United States has a long history with Israel. The U.S. was the first nation to recognize Israel.

But that was when we had strong leadership in the White House. And, yes, it was a Democrat that issued the recognition: Harry S Truman.

Now, we have someone in the Oval Office who defends Israel's enemies while constantly criticizing our strongest ally in the Middle East.