What's up with those duplicate tweets from @basilsblog and @IMAO_ ?

On teh Twitter earlier today, I promised I'd solve a mystery.

Oh, it's not a big mystery. Or even an important one. But, it was nagging at some of the people that follow me on teh Twitter. And I promised I'd answer their questions.

Shayne Rivers was the first to ask: Ok, what is up with @basilsblog and @IMAO_'s twitter feeds?

Here's what he was talking about. These tweets came across: 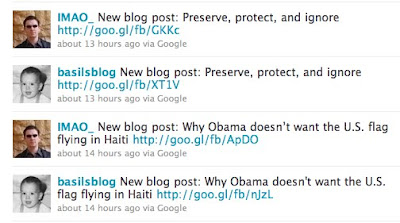 That prompted the "What's up with that?" question. And Rick Sheridan wondered, too.

And, since teh Twitter is limited to 140 characters, there wasn't really enough room to explain.

It's possible to have a blog automatically update a Twitter account every time a new post appears. Many, many blogs do this, including IMAO and this little blog. And both Frank and I use Feedburner to perform this little blog-Twitter magic.

You see, I occasionally post stuff at IMAO. The thing is, I also post the same stuff here. Of course, I post stuff here that I don't publish at IMAO.


The rest of the IMAO bloggers (Laurence Simon, spacemonkey, RightWingDuck, Cadet Happy) actually don't write there much any more. I don't know why. Well, I think I know why one doesn't. But I can't figure out why the others don't. I wish they would. They're good.

Me? I'm not actually part of the IMAO crew. Not officially. I've posted more there than some of the MIA bloggers. And, more than SarahK, too, I think. But, I'm actually a guest blogger, posting as long as Frank sees fit to allow me to. Or until I get hit by a bus or something.

The point is (yes, I have one) that there is nothing exclusive about what I post. At least, unless and until Frank says he wants it that way. I write posts for my blog, and will occasionally cross-post at IMAO, since Frank allows it.