Cuban health care, coming soon to a doctor near you 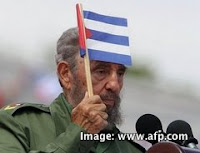 Liberals should be proud.

Thanks to them, you won't have to go to Cuba to get Cuban health insurance. You'll be able to get that in the USA.


Cuban revolutionary leader Fidel Castro on Thursday declared passage of American health care reform "a miracle" and a major victory for Obama's presidency, but couldn't help chide the United States for taking so long to enact what communist Cuba achieved decades ago.

"We consider health reform to have been an important battle and a success of his (Obama's) government," Castro wrote in an essay published in state media

Don't tell me "Oh, no, Cuban health care isn't what I had in mind." Because I told you so. Dumbass.

And the worst of it? Some people will be saying that being like Cuba is a good thing. Dumbasses.

Email ThisBlogThis!Share to TwitterShare to FacebookShare to Pinterest
Labels: Obamacare