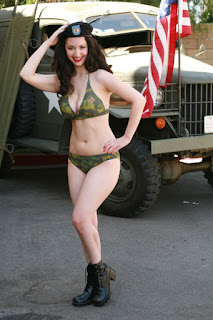 
Over the past year, I have heard and read incredible stories about the injured soldiers returning from military service. Their hardest battles have just begun, as they attempt to recover in Veterans Hospitals all across America . I was touched by each story, and knew that I had to try to do something to help our hospitalized Vets. I came up with an idea to recreate a World War II style pin-up calendar that would have the dual purpose of raising money for programs that support hospitalized Veterans, and also serve as a GIFT for each and every Veteran, as they recover in a Veterans Hospital. - from pinupsforvets.com


Sounded like a great project to me. And still does.


I just wanted to let everyone know that I am getting ready to wind down the this year's calendar fundraiser project before I start the production of the 2008 calendar! Get ready! :) There are 80 calendars left. I'd like to sell them so I can make a great donation to the Veteran's Hospital! So, if you want a 2007 calendar, or would like one to be donated to a hospitalized vet or deployed military, try to purchase it soon before they are sold out. Just wanted to give everyone a heads up on this.

This was my very first year doing the project and the response and support has been unbelievable. I am so grateful to each and every one of you who purchased a calendar to support this cause. I am also so grateful to the all the fantastic bloggers, Stars and Stripes, and all the newspapers for covering the story about the project to get the word out there. This project would not have been a success without you. It's a very large team effort..and wow...do we have a loyal team!


I appreciate folks that do things for our veterans. And I have the feeling that veterans would appreciate what Gina's doing, too.
By Basil at 3/11/2007 08:00:00 PM

Email ThisBlogThis!Share to TwitterShare to FacebookShare to Pinterest
Labels: Military