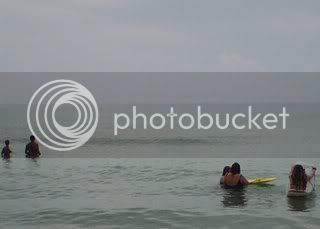 At the beach, humans are fascinated by everything.

The Wife and I were sitting, relaxing on the beach, under the umbrella, in the recliner, cooler between us, almost snoozing... when we noticed people pointing at something.

Dolphins had swum close to shore and were putting on a little show for the people on the beach and in the water.

I never did get a really good picture. Or video.

But there were about 3-6 dolphins swimming around.

But see that group on the left in the photo. I'm thinking there were more than 2 in that group.