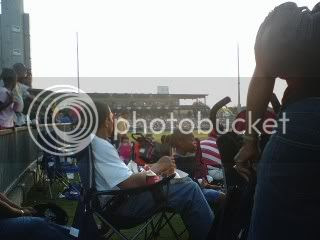 Went over to Montgomery last night to watch the ball game.

How'd that go you ask?

No really, go ahead and ask.

Ah, since you asked. Not too good.

As you can see by the picture, the view of game wasn't the best.

You see, we didn't get there late. We just got there after all the tickets were sold.

Only, in Montgomery, they'll still sell you a ticket, even though they're sold out. They'll let you sit on the grass.

So, we sat way down the third base line, barely able to see anything. 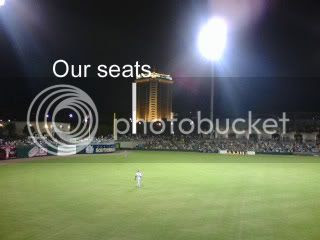 And, though we got there before the game started, by the time we made it through the ticket line, then worked our way to a place to sit, the Mississippi Braves were leading the Montgomery Biscuits, 1-0.

I took my grandson to get a hot dog, and while we were doing that, Mississippi scored three more runs, to take a 4-0 lead.

We were getting ice cream -- actually, Dippin' Dots -- the Biscuits managed their first hit of the game. A 5th inning double by 2B Josh Asanovich drove in LF J. T. Hall, who had walked, closing the gap to 4-1.

A trip to the gift shop allowed us to miss Mississippi scoring another run, to take a 5-1 lead.

However, we made it back to our seats in time to watch Mississippi score on solo home runs in the 7th and 8th innings. 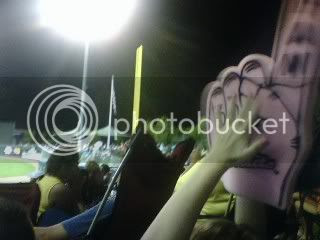 In the bottom of the 9th, we almost saw Asanovich score on SS Ronnie Merrill's 2-out single. 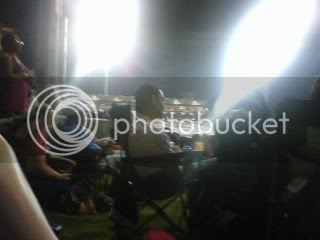 And, though the Biscuits fell short in their comeback, the grandchildren got to see the fireworks afterwards.