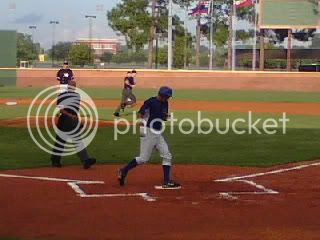 Another late-inning win for the Columbus Catfish tonight.

That's got to break the hearts of the Kannapolis Intimidators (White Sox). But the fact that tonight's inning run came on a balk ... well ... that's got to really hurt.

Regardless of how the run scored, it proved to be the winning run in the Catfish 5-4 win.

The game was highlighted by a great pitching performance by Kannapolis starter Charlie Shirek who allowed 1 run on just 2 hits in 5 innings work. Catfish starter Jason Ragan was nearly as impressive over the first 5 innings, allowing a run on 4 hits. Things got away from him in the 6th, when Kannpolis scored 3 runs on 4 hits before he gave way to reliever Kevin Boggan.

Kannapolis took the lead in the 1st inning, but the Catfish tied it in the bottom of the inning on a solo home run by LF Reid Fronk.

After Kannapolis took a 4-1 lead in the 6th, the Catfish tied it in the bottom of the 6th. Fronk walked, then moved to second on a balk. 3B Greg Sexton walked, then RF Quinn Stewart loaded the bases on a bloop single to right. With 1 out, C Mike McCormick singled, scoring Fronk and Sexton, and moving Stewart to third. Stewart tied the game when he came home on a wild pitch.

Things remained tied until the bottom of the 8th. With 1 out, 1B Stephen Vogt doubled, then moved to third on McCormick's singles to left, and scored on a balk, putting the Catfish up 5-4.

Justin Garcia, who pitched the final 2 innings picked up the win, his 1st.

Besides the balk, Kannapolis had other things not go there way this evening. They argued Fronk's home run, but the umpire made the right call. It hit off the AT&T sign, just above the yellow line on the brick wall. It appeared to have hit off the brick wall, but the unmistakable "thunk" of the ball off the wood billboard won the case for the Catfish. Home plate umpire Ben Robinson overruled field ump Mario Seneca, siding with Catfish skipper Matt Quatraro, giving Fronk the round-tripper.

In the next inning, the Catfish had a call go their way, when DH Sergio Miranda bounced a ball down the first base line that appeared to be fielded by Vogt in foul territory. However, it was ruled fair, and the Catfish turned a double play. Kannapolis OF Nicholas Damas, who was coaching at first, was thrown out by Seneca after sharing his thoughts on the call.

In the top of the 5th, Miranda was hit by a pitch, prompting Robinson to warn both benches, which produced another argument from Kannapolis.

In the top of the 8th, Kannapolis LF Jim Gallagher struck out. The official scorer ruled a called third strike. I thought the ump ruled that Gallagher failed to check his swing, since the pitch appeared to me to be shoulder high. Regardless, Gallagher was displeased with the call, and said so. Robinson tossed him, prompting Gallagher to go nose-to-nose with Robinson before Kannapolis skipper Chris Jones intervened.

Jones tried to replace Gallagher with Damas in left in the bottom of the inning. That's when the umpire crew realized that Damas hadn't vacated the bench after being tossed in the 2nd inning.

Overall, Kannapolis was quite displeased with the umpires tonight. In a couple of instances, they had a legitimate gripe. But certainly not in all disputed calls.