Went to Chicago last weekend. It was a birthday / anniversary / vacation trip.

The plan was to head to Atlanta, catch a flight to Chicago, drive to Wisconsin for a Jimmy Buffett concert, then back to Chicago for a ball game, and other tourist kinda stuff.

Well, the concert was fun. As was the White Sox game.

The trip began, though, in Atlanta.

Now, Atlanta isn't my favorite place in the world. But it's not my least-favorite, either. Spent the night at the Fairfield Inn Airport North. Folks there were, as always, great. So, Atlanta wasn't a problem. Unless you count the airport.

And, really, the Atlanta airport is what it is: a very busy airport.

The only real issue was trying to get something to eat at the airport.

Since the flight was a short flight -- just over an hour in the air -- there was beverage service only. And I'd be in the air at lunch time.

So, I ran to the nearest place, something called "Miller Lite Victory Lane." They had a to-go area called "FastLane." 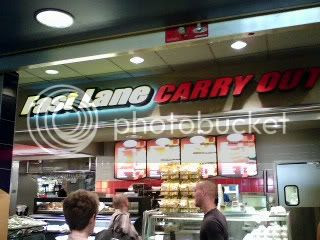 But that's just the name, not a description, I found out.

Part of the problem was the staff. They were in no hurry. None whatsoever.

They were polite. But slow.

The other problem? The jackasses who didn't want to get a to-go order, but ordered in the to-go section anyway. The staff did make an announcement asking that folks not do that, but some people are jackasses and do stuff like that anyway.

And that slowed everyone down.

I did get my sandwich, though. And was the last one to board the plane.

Didn't delay the plane at all, but I felt like a jackass.

Email ThisBlogThis!Share to TwitterShare to FacebookShare to Pinterest
Labels: travel