Fronk homer in the 9th powers Catfish to win 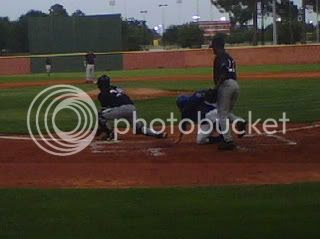 The Kannapolis Intimidators (White Sox) failed to live up to their nickname tonight.

The Columbus Catfish never trailed, but did need 9th inning heroics to secure the win tonight, as they beat Kannapolis, 7-5, opening a 4-game series and 8-game home stand.

The Catfish got on the board in the 1st inning. 3B Greg Sexton doubled home SS Shawn O'Malley, who reached on an error and stole second to put the Catfish up 1-0. RF Quinn Stewart drove home Sexton with a single to right, and the Catfish led 2-0.

Kannapolis tied the game in the top of the 4th, but the Catfish regained the lead in the bottom frame.

With 1 out, back-to-back doubles by Stewart and DH Stephen Vogt put the Catfish up 3-2. With 2 outs, 1B Henry Wrigley singled to center, scoring Vogt and giving the Catfish a 4-2 lead.

After O'Malley doubled to lead off the 5th, Stewart drove him in with a 2-out single to left, and the Catfish had a 5-2 lead.

The Catfish took the win in the 9th when, with 1 out and O'Malley on first, LF Reid Fronk homered to left-center, giving the Catfish a 7-5 win.

Stewart led the Catfish with a 3-for-5 night at the plate. He scored a run and had 2 RBIs. Vogt and 2B Omar Luna had a pair of hits. Every Catfish batter had at least 1 hit, except CF Maiko Loyola, who walked and stole his team-leading 34th base.

Starting P Jesse Darcy went 5-2/3 innings, allowing 4 runs on 7 hits, striking out 5. He left with the lead. Jose Angel Mejias went 2 innings, allowing a run on 1 hit. Austin Hinkle went the last inning a 1/3, blowing his 3rd save, but picking up the win. He struck out 3.

Tonight's game is the first against Kannapolis this season. The Catfish and Kannapolis only play this 4-game series during the season, despite being in the same division. Game 2 is Tuesday night.
By Basil at 7/07/2008 06:11:00 PM