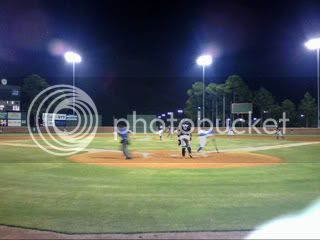 Despite the win, the Catfish are one game closer to elimination, thanks to Augusta's 5-1 victory over Hickory tonight.

With tonight's results, Augusta's "Magic Number" ... and Columbus' "Tragic Number" ... is one. A single Augusta win or Catfish loss gives Augusta the 2nd half division crown. However, if Augusta loses out, and the Catfish win out, the Catfish take the title.

Savannah jumped out to an early 2-0 lead with a pair of runs in the 2nd inning.

3B Greg Sexton, 1B Stephen Vogt, and RF Quinn Stewart all singled to cut the lead to 2-1. A wild pitch, followed by a walk by C Mike McCormick loaded the bases, then another walk, this one to 2B Seth Dhaenens walk, sending Vogt across the plate to tie the game. With 1 out, CF Maiko Loyola singled to left, plating Stewart and giving the Catfish a 3-2 lead.

Savannah tied it on a Jefferies Tatford (1B) homer to right in the top of the 3rd.

LF Reid Fronk walked, stole second, then scored on an error to put the Catfish back on top in the bottom of the 3rd.

In the 4th, Loyola walked, stole second, went to third on a wild pitch, then scored on a balk.

McCormick homered in the 5th, scoring Vogt who had reached on a bunt single, and the Catifhs had a 7-3 lead.

The Catfish, though, weren't done.

With 1 out in the 8th, SS Omar Luna single, moved to second on a ground out, then scored on a Fronk single to right. Secton followed with a single to left, scoring DH Shawn O'Malley, who had walked, and Fronk, giving the Catfish a 10-5 lead.

Starter Jesse Darcy picked up his 8th win, working 5 innings, allowing 3 runs on 6 hits, striking out 7 and walking just one. Reliever Kevin Boggan tossed 3 innings, allowing a pair of runs on 3 hits, recording 2 strikeouts. Austin Hinkle allowed one base runner on a passed ball strike out. He recorded 2 strikeouts in the 9th to seal the win.

Every Catfish batter either scored a run or drove one in. Sexton, Vogt, and Luna each had a pair of hits for the Catfish.

The win was the 7th straight over Savannah. However, Augusta's win tonight puts a serious damper on the Catfish' playoff hopes. In fact, their playoff hopes are mostly dead. However, as Miracle Max said, "There's a big difference between mostly dead and all dead. Mostly dead is slightly alive."

But, the Catfish had a game postponed this week. They were schedule to host Rome for 3 games, but the weather only allowed for 2 games. There's still that game to make up. The SAL has not announced a cancellation of that game. A win there, and the Catfish are 42-25 (.627).

On August 1, the Catfish game with Augusta was suspended in the 3rd inning, with the Catfish leading, 6-5. The SAL has not announced a cancellation of that game. If necessary to be played, Tuesday would be the day for its completion.

And the Columbus Catfish would be in the playoffs, while the Augusta GreenJackets would be wondering what happened.

Sure, it's not likely. But it's possible.

Unless the SAL announces the cancellation of either the postponed game with Rome or the suspended game with Augusta, the Catfish are not eliminated. Which, of course, means that Augusta has not clinched.

An Augusta win in any of their remaining games, or a cancellation of any remaining Augusta game, and Augusta wins the division.