Not so fast, Sally! 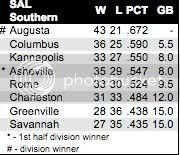 I got to the ball park tonight, awaiting the game between the Columbus Catfish and the Savannah Sand Gnats (Mets). I fired up the MacBook ... and got a shock.

The South Atlantic League says the Augusta GreenJackets (Giants) won the second half.

So, why do I think they're still in it?

A couple of reasons, actually.

Augusta has 5 games left, true. Only, they might actually have 6 games left. More about that in a moment.

That still not good enough.

And that would mean the Catfish win the second half.

Now, will that happen?

Odds are, it won't. And I realize that.

But, to go ahead and put on their Website that Augusta has won?

Maybe not by much. But baseball is a game of inches ... and numbers.