The first college football mascot to be invited to the Heisman Trophy ceremony at the Downtown Athletic Club in New York was the University of Georgia's Uga IV.

UGA (The University of Georgia) has had mascots named Uga since 1956.

Uga IV's visit to the Heisman Trophy ceremony isn't the first "first" for one of the dogs in the Uga line.

Uga V made the cover of Sports Illustrated in 1997, as well as becoming a photo star for the picture of him lunging at Auburn's Robert Baker in 1996.

Something about Uga has touched not just UGA fans, but others as well.

When Uga IV was at the Downtown Athletic Club for Herschel Walker's Heisman Trophy, one of the former Heisman winners stepped over and gave him a friendly pet: Steve Spurrier, 1966 Heisman winner from ... and later head coach of ... one of UGA's biggest rivals, the University of Florida.

When Uga VI died earlier this year, it was on the front page of sports publications and Web sites. 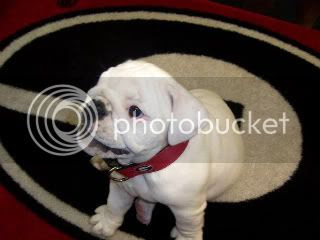 There will be a new mascot -- Uga VII -- when the Bulldogs take the field this fall.

As you can see, he's just a puppy. But he's not the first puppy to debut at the beginning of football season. Uga VI was only 6 months old when he took over in 1981.

Pictures of Uga VII will be widely available soon. I haven't seen any yet.

I got some pictures recently, from reliable sources, showing the new mascot.

This is one of them.

Bulldog fans have high hopes for their football team this year. UGA is ranked number one in most pre-season polls.

But Uga VII is already number one in their hearts.

Update: Turns out this pup isn't the new Uga. I should have researched it a little better. The pup in the pics I received actually belongs, not Uga owner Sonny Seiler, but rather, to Mike Woods, a UGA fan, shown here: 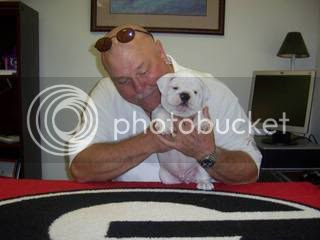 I should not have researched the pics better. When I got up this morning, I did a little bit of research ... slightly different than last night's research ... and found, in short order, that the pics are NOT of Uga VII, but rather, of a pup that belongs to a UGA fan.

When Uga VII pictures are actually released, I expect you'll see them from much more reliable sources than this little blog.
By Basil at 8/25/2008 07:34:00 PM