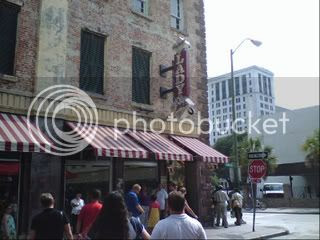 While in Savannah this weekend, we ate at Paula Deen's place.

The Wife likes to watch the Food Network. And she's been wanting to go to Paula Deen's restaurant in Savannah. The Lady and Sons.

The thing is, I just didn't "get" the whole Paula Deen thing. But I'm not "dissing" it or putting it down in any way. But to most people, she's a Food Network star. The Wife included.

I remember when she made a name for herself when she started up her business. Because I read the Savannah newspaper and watched Savannah TV when I lived over in that part of the state. For the first, on, 30-something years of my life. Anyway, suddenly, one day, Paula Deen was a TV star.

And good for her. 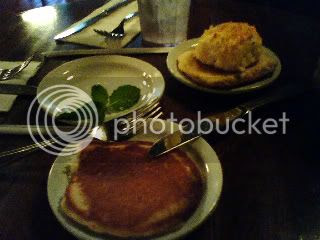 We were sitting in The Lady and Sons when the waitress brought us the biscuits and cornbread.

And the couple at a table near us didn't know what it was.

I had to listen to the waitress explain the biscuits and cornbread.

They had never seen flat cornbread.

Probably because they weren't from around there. Or anywhere near there.

Which shows to a degree that I grew up eating food like you eat at Paula Deen's.

The macaroni and cheese tasted a whole lot like the way a great-aunt made it. And the fried chicken a lot like another lady I knew used to make hers.

In other words, it was good eatin' ... and like the eatin' I was used to coming up.