Trimming a plant with the ceiling fan

Saturday night, we went to the Miss Columbus pageant.

I had a family member competing in one of the teen pageants.

Yep, I won at the Miss Columbus pageant.

No, not on stage.

I bought some tickets for plants.

There were a couple of young ladies wearing sashes and crowns -- I don't remember what they were the reigning Queens or Little Misses for -- and they were selling tickets to get to take home some of the plants used to decorate the stage. And I bought five tickets.

They drew the winning tickets, and the first number drawn was one of those tickets. Oh, and the 3rd one drawn, too.

Which meant that, after the pageant was done and we gathered everything to head home, I had to carry a couple of plants out. One was, oh, maybe 2-3 feet high. Some kind of fern or something, I don't know. The other was a bit taller, 4-5 feet high.

When I finally got to the house ... a little before 1:00 AM ... I unlocked the door, reached in and turned on the light, and the cat rushed in. The Wife then entered. Then I went inside. I dropped the Mac on the couch and asked where to put the plant.

The Wife said, "Just down there," pointing to the floor. 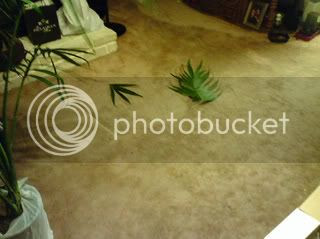 It was accompanied by a slight tug, and a showering of leaves.

Yes, I had walked into the ceiling fan with the plant.

The worst of it? I had, just this week, told her a story about a friend of mine who, many years ago, had accidentally cut the shafts off a car stereo. Yes, shafts. Remember those? Car stereos used to have those.

Anyway, he was working on one, and stood up. The power cord was hung on something, and he gave it a slight jerk. Only, not too slight a jerk. Because the cable easily came free from its obstruction, but the force of the upward jerking motion meant the car radio's path went directly into the metal ceiling fan.

Trimmed off the shafts as clean as you please.

The look on his face was priceless. I laughed my butt off. Because it wasn't my car radio.

Well, like I said, I related that story to her this week. Not sure why.

And tonight, I cut off her new plant with the ceiling fan.